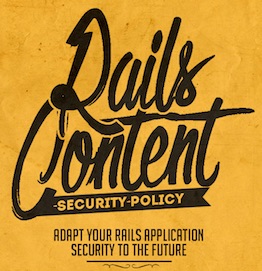 The CSP HTTP header is a set of rules for the browser. You can use it to whitelist sources for scripts, styles, embedded content, and more. I.e. all other sources are disallowed.

CSP is a great way to reduce or completely remove Cross-Site-Scripting (XSS) vulnerabilities. That would wipe out the number 1 web app security problem. Why? Because an effective CSP disallows inline scripts. It only allows scripts in separate files from trusted sources.

Here's how the header looks like if you want to allow scripts only in files from the same origin and from G* Analytics:

What does CSP protect us from?

Which header should I send?

Rails and the Content-Security-Policy configuration

Rails 5.2 added CSP support, but in earlier versions you can add the header yourself. Or use the SecureHeaders gem. It recognizes the browser and will send only the CSP directives supported by it. It doesn't do any harm sending unsupported directives. But CSP script warnings in the developer console are unnecessary.

No time right now? I'll send you a summary and Rails Content-Security-Policy updates.
Get CSP updates

I'll call it a legacy Rails app if:

The "traditional" CSP approach for a legacy Rails app

There's no default Content-Security-Policy in Rails 5.2. And it's sensible because a useful one is tailor-made. The default SecureHeaders CSP policy allows pretty much everything "https" and from the same origin ('self'). In browser security terms, the same origin means the same protocol scheme, host, and port. And there are three main restrictions in this default policy:

Once this CSP works you can start locking down the script whitelist. Your goal in this approach should be 1-3 hosts for your own scripts. And a limited whitelist for 3rd-party scripts, if needed. But try to limit the dependencies as much as possible. Every extra whitelisted host adds to the risk of bypasses via JSONP (see below).

Trying to get some inspiration for this approach? Here are the key CSP directives from Github in Rails 5.2 syntax:

This is a true whitelist with nothing allowed by default (default-src: 'none'). But note that Github had significant effort to move all scripts to a single host, including analytics.

The nonce-based approach for a legacy Rails app

Instead of a host whitelist, you can also 'sign' a script using an unguessable random value (a 'nonce').

Define a nonce in the CSP header like so: script-src 'nonce-{random}'. Now you can use it to whitelist one script (or more): <script nonce="{random}">{JavaScript}</script>. The SecureHeaders gem has a handy method nonced_javascript_tag to ease that. Rails 5.2 added a nonce: true option to the javascript_tag method.

You might already know that. But note that there's a second way to use nonces with external scripts: <script nonce="{random}" src="{URL}"></script>.

That means you don't have to whitelist this script's host. That's a good way to include scripts from hosts with known bypasses. Above script doesn't work in MS Edge though due to a bug. SecureHeaders also has a method for that: nonced_javascript_include_tag.

The nonce-based approach is best for applications with a classic request-response model. It also helps you to use a CSP now, while slowly moving inline JS to external files and develop a whitelist.

Ajax is also possible in this approach. But it can't help with JS in Ajax responses, e.g. in *.js.erb views. Try to use a different JS architecture for these Ajax responses.

Also, you'll need to test your 3rd-party JS libraries whether they load more dynamic dependencies from additional hosts. You can add those extra hosts to the whitelist. Or if the 3rd-party JavaScript snippet is rather small, you can also rewrite it to use nonces at all levels.

But this approach doesn't play well with caches, single-page apps or Turbolinks. Because the document in the browser has one CSP nonce and the next request uses already another. For JSON Ajax requests that should be fine. But e.g. Turbolinks replace the entire page, but not the CSP that the browser expects.

To solve that you can cache a nonce and use it again as long as the session lives. That makes Turbolinks or similar work again because all following nonces are the same. You can use the handy csp_meta_tag method from Rails 5.2 for that. Or do it yourself when you're using SecureHeaders.

The hash-based approach for a legacy Rails app

Calculate the digest of a static inline script <script>{JavaScript}</script> and add it to the CSP config like so: script-src 'sha256-{digest(JavaScript)}'.

This makes it easy to include a small number of inline scripts. It should also work fine with caches because a digest stays valid. But it doesn't play well with single-page apps or Turbolinks. That's because Turbolinks don't update the CSP on page change. But of course you could list all hashes of all inline scripts in the CSP header.

The 'strict-dynamic' approach for a legacy Rails app

Firefox, Chrome and Opera also support CSP version 3 which includes the strict-dynamic directive value. Microsoft Edge has it under consideration.

The "traditional" whitelist approach may be vulnerable to bypasses via JSONP. That's why 'strict-dynamic' came into place. JSONP is a legacy technology for cross-origin request. JSONP endpoints return the callback JavaScript from request params.

This approach makes it easier to deploy in the first place. 'strict-dynamic' will allow 'nonced' scripts to load more dependencies. The idea is to trust already whitelisted scripts to load only trustworthy scripts.

On the other hand it means you loose full control over the whitelist. But for some apps that's not possible anyway. And strict-dynamic clearly makes it easy to adopt a (rather) strict policy.

You'll only need to refactor anything that uses javascript: URIs or onclick handlers. Note that 'strict-dynamic' is backwards-compatible. When supporting browsers see a 'strict-dynamic' policy, they will disregard the whitelist. For example:

CSP for a perfectly organized app

Here's an example of what Content-Security-Policy config to aim for long-term. The main architecture decisions here are that static scripts and (config or user) data are completely separated. Also, all assets live on a separate CDN host. That might not be the best architecture for every application. But it has a few advantages:

But it can be quite some work to untangle scripts and data.

This example is in the SecureHeaders syntax style. The Rails 5.2 DSL is only slightly different (using lists instead of Arrays for the values).

This is what you'll need to add to your CSP config file if you use the following libraries and services:

If you leave out the protocol in CSP whitelists, only downgrades trigger a CSP violation. Downgrade here means when loading from http:// sources on a HTTPS-only website.

Note that there's no need serve a CSP for the redirect response from HTTP to HTTPS.

There's a preserve_schemes option in the SecureHeaders gem which removes all protocols from your sources when set to false.

Cross-check your host list in the Google CSP evaluator for known bypasses.

It might not be very obvious, but you can serve a different CSP for every request. In practice though, you're restricted by Turbolinks or Ajax requests. But you can definitely do different CSPs per area. Or one for the marketing site, one for the app.

This is how to override the default policy in controllers from Rails 5.2:

The SecureHeaders gem uses so-called named overrides. This keeps all configuration in the initializer and then you switch the policy like so:

These are the most important directives. See below for the values.

The browser will send CSP violation reports to the URI in the report-uri (report_uri in the Rails config DSL) directive. You'll need this for the Content-Security-Policy-Report-Only header to adjust the policy before going live. But you'll also need it for the production policy to monitor it.

Note that this endpoint might see quite some traffic. So you might want to only save incoming reports and process them later. But you can use this endpoint controller code to get started:

This is the SecureHeaders configuration for the endpoint:

And here's the table migration:

And here's how the report's JSON looked like when I injected an inline script (which was disallowed):

Take good caution with the endpoint and the reports. An attacker might run a DoS attack against it if the endpoint is slow. But if you deploy a bug, you'll also get a lot of legitimate reports. But still, it can be a good idea to rate-limit the endpoint.

You're Almost Done! I just sent you an email. Open it and confirm your email address by clicking the link in it. You won't be subscribed until you complete this step.